Frustration, we can get through this, the stock market is falling and the traders are falling like flies, the investors are not so easily bought, and those phone calls no longer work, they have other matters on their minds, what a lot of grief, can’t pump the stock and convince someone anymore.

Religious barter, wars and indifference, there has to be a solution to all this. Well I am not willing to share, lets get a third opinion. They buy the opinion of the expert to give them the opinion they want. They know it’s all lies, but the expert gave them the nod, and his testimony is on record. At the worst, they will blame the expert, and they will try another way, determined to get their way, one way or another.

The approval of the religious gave the fanatics the licence for war. Who was going to disagree, the weight of the opinion, you’d be a fool to go against him. Solomon sighed, the replacement of the opinions that went against the trend, same as the spoiled child, who always had his will done.

Solomon sighed, men went to war, given the licence to kill, and when they needed rest, those that led them, gave them licence to pillage, enslaving women, well boys, you need to let the weapons down, go help yourself, those women can easily be replaced. This is not a diet of behaviour that can last. after a while, places became institutionalized, became places, where no spirit dared enter.

Paradise, Solomon smiled, what a dream. One, then two, then three, when we want to make it happen, we will start on the steps necessary. The world might have reversed into a cul de sac for awhile, but there wasn’t anything stopping a reversal of policy.

Jesus gave us fair warning of the efforts of those who held sway, who would try to stop all forms of change, that did not leave them in charge, he even laid out the steps. Eternal truths don’t come often, but Solomon could testify, the Spirit had arrived, and after wards, those of the other Spirit arrived, and tried to remove the inner peace, that gave the Spirit space. He had news for them, those who even dared attempt interfere with the Holy Spirit, it wasn’t forgivable to begin with, so says Jesus. Know your roots, amen. 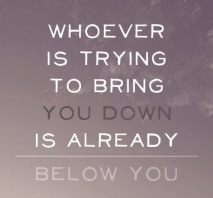