The day is an anniversary, there is a double bonus, a treble, there are smiling faces everywhere, the Spirit is alive, there is calm in the temple, there is a sense of awe, their is the feeling of strong belief, children sit quietly, their movements plentiful but quite, no one shouting aloud, all talk cheery, the Spirit that is in Saint Blaise is about, passed on in generations, the habits we pass on. The seats are near full, the preacher Father, speaks in gentle tones, reminds all of the Power of the Holy Spirit, and how this gift enabled Saint Blaise to heal, afflictions to the throat, the rest is wikipedia…

From being a healer of bodily ailments, Saint Blaise became a physician of souls, then retired for a time to a cavern where he remained in prayer. As bishop of Sebastea, Blaise instructed his people as much by his example as by his words, and the great virtues and sanctity of the servant of God were attested by many miracles. From all parts, the people came flocking to him for the cure of bodily and spiritual ills.[5] He is said to have healed animals (who came to the saint on their own for his assistance) and to have been assisted by animals.

In 316, the governor of Cappadocia and Lesser Armenia Agricolaus began a persecution by order of the Emperor Licinius and Saint Blaise was seized. After his interrogation and a severe scourging, he was hurried off to prison,[5] and subsequently beheaded.

The Acts of St. Blaise[edit] 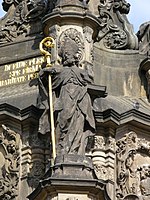 Statue of Saint Blaise at Holy Trinity Column in Olomouc.

The legendary Acts of St. Blaise were written 400 years after his death, and are entirely apocryphal and fictional.[2][9]

The legend is as follows:

Blaise, who had studied philosophy in his youth, was a doctor in Sebaste in Armenia, the city of his birth, who exercised his art with miraculous ability, good-will, and piety. When the bishop of the city died, he was chosen to succeed him, with the acclamation of all the people. His holiness was manifest through many miracles: from all around, people came to him to find cures for their spirit and their body; even wild animals came in herds to receive his blessing. In 316, Agricola, the governor of Cappadocia and of Lesser Armenia, having arrived in Sebastia at the order of the emperor Licinius to kill the Christians, arrested the bishop. As he was being led to jail, a mother set her only son, choking to death of a fish-bone, at his feet, and the child was cured straight away. Regardless, the governor, unable to make Blaise renounce his faith, beat him with a stick, ripped his flesh with iron combs, and beheaded him.[10]

1 thought on “Saint Blaise Day…from wikipedia, a bit of a healer, good for the throat, helps with singing too imagine…..”